In recent decades environmental disasters have frequently struck the poorer countries of the southern hemisphere. The Germans naively believed that, as these environmental catastrophes were far from Europe, action on climate could be deferred.  But the recent floods in Germany mean that actives measure need to be taken now before it is too late for any damage to be undone, a message underscored by UNEP chief Inger Anderson at the Glasgow climate conference.

In July 2021, a torrential area of heavy rain moved across the West of Germany. The Ahr valley was particularly affected. In the manner of a reporter, the artist Catrine Val moved into the area with her camera because she felt frighteningly reminded of the post-war situation in Germany. The imagery of the towns in ruins and the horror of loss shattered any sense of security. The artist Catrine Val visited the devastated area a few weeks after the disaster struck and confronted scenes terrifyingly reminiscent of post-World War II Germany.  In the aftermath of the war it was primarily woman and children who were left behind to salvage the remains of their existence and rebuild their cities from the rubble.  Although this no longer applies the aftermath of the recent floods brings up uncomfortable reminders of the past.

A 90 year old lady, completely distraught as she compared the loss of all her belongings in the flood with the never recovered memories of the war experiences of her youth, was the key moment for Val’s project BANG BANG Wonderful Vulnerable World. The vulnerability of our existence, but also the power of women to believe in the future and to fight unconditionally to create safe atmosphere of reliability, esteem and recognition she has processed in a series of photographs and a two channel video installation.

Catrine Val’s artistic projects consistently explore the role of women within divergent cultural and political systems. For this project, she has worked with mirror images, juxtaposing the generation of women in ruins with young women who are confronted with different kinds of ruins but still have to cope with similar problems.

She has juxtaposed the portraits of these women with landscapes, inner and outer Landscapes from the Ahr valley but also landscapes of our fully industralised and digitalised environment. In this combination, mountains of rubbish seem like poetry and destroyed villages become an abstracted beauty. Hope arises, the thought of good after all the cruelty. Mountains of rubbish piled up along the streets within a short time. Here there is room for damage containment and the restoration of normality. The imagination inherent in the women of the ruins is transferred and reconciles us with the world, allowing us to glimpse great change in the small steps.

Catrine Val was allowed to photograph in houses in which only the outer walls, their innermost skin, survived. In her photographs, the tender edges of the water seem almost invisible, in the mud-splattered skeleton of a devastated home. A single lady pushed her way through the raging waters in the night, took refuge on the 2nd floor, and she still could not be saved. Possessions shape our identity, they assign us a role that keeps us in the world.

Val’s 80 to 100 year old protagonists dance mentally back to their own childhood, youth and young adulthood in the conversations. The memories of the bombing raids are omnipresent in all of them. Rescuing the remaining belongings from the rubble, going to the countryside with an empty stomach to forage. That is how they had to fight for survival in the devastated cities and care for their children.They cooked delicacies out of miniscule things. They cleaned, drove lorries and trucks, drove construction cranes, became bricklayers and literally had their children in their aprons.  Hunger drove them into the mountains of rubble: because when they cleared rubble, they got food stamps. They managed to manoeuvre their families through famines and cold winters in these inhospitable times. They were the true heroines. They were the visionaries who pushed for a new beginning. Out of necessity. The staged documentary photographs are in direct dialogue with the recurring portraits in Trenchcoats – According to legend, the Trench coat has its origins in the First World War. In German, the word “trench” means ” Schützengraben”. And in these, the soldiers are said to have hidden from enemies, camouflaged by the typical muddy beige brown.In BANG BANG, this simple but elegant and timeless raincoat was equated with the protective cover of a second skin. In this uniform, the protagonists, both young and old, felt safe and protected, in keeping with the function of this garment. This masculine coded garment gallantly guides the gaze to the beautiful, vulnerable faces of the protagonists and empowers them. Encased like a butterfly cocoon, the young and old generations of women are thus impressively connected.

This rubber-coated cotton makes body language appear light as a feather and the play of the hands is declared a dance. One’s own individuality is emphasised. The earthy colour of the coats refers to the gloomy “mud” of history and the mud of the angry riverbed spilling out of its banks. Because even if the dress code has become more casual in the meantime, it is still a complex system of rules and messages. True, during the war it was only worn by those who could afford it: Officers and other high-ranking soldiers. Less to be well protected in the moat than more to manifest rank and class to the outside world. It is to this day a status symbol. Following on from her last project, Living Memories, in which Catrine Val spent over a year working with Holocaust survivors and their families in London, BANG BANG is again about mementos that tell stories, the well-kept treasures of the past that sustain memory and conjure up old ghosts.

Photo albums are rummaged through and ladies are illuminated in their long-stashed dresses, where their bodies and souls celebrate each other in clips of time long gone. Our memories are tied to places, smells, faces, to family stories, to experiences that one passes on to the next generation. Even if German responsibility cannot be globalised with the interconnectedness of the world. So these mountains of rubble stands as a reminder that time is the most precious thing we have left.This project shows the urgency of taking action now. We must not ignore the voices of the elderly, the contemporary witnesses. They must be as loud as the Ahr had swelled into deafening raging torrents, crushing whole houses in its brown mud, blocking the way to saving safety.

In this project, artist Catrine Val looks back and at the same time goes far into the future by asking: “What remains when everything breaks? When the things that make us happy just disappear? Who do we want to be after the crisis and in what landscapes do we want to live?”  In doing so, it releases a potential that we can more than urgently use in the current situation: Hope and the will to preserve what is good and to create visions. 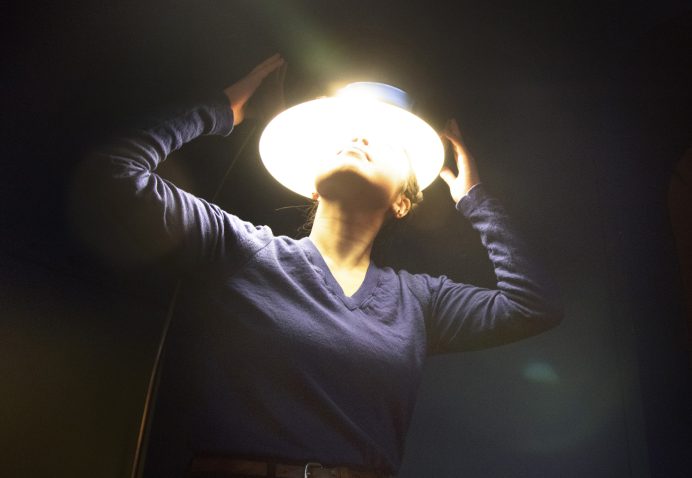